The Blue Badge is Britain’s national qualification for professional registered tourist-guides, awarded by the Institute of Tourist Guiding. It is recognised by quality tour operators and travel companies throughout the world as a bench mark of excellence.

Blue Badge tourist guides are the only guides (other that in-house guides) authorised to guide in, for instance, the Tower of London, Westminster Abbey, St Paul’s Cathedral and Windsor Castle.

The training normally lasts eighteen months with eight rigorous written and practical examinations. An important feature is that as well as acquiring knowledge, Blue Badge guides are tested in the way that the information is selected and presented – entertaining, informative and factually accurate.

The Blue Badge was first awarded in London in 1951 and then adopted as the national standard by British regional Tourist Boards from 1969. It is now awarded by the Institute of Tourist Guiding, which is the officially recognised standard-setting and awarding body for tourist guiding in England, Northern Ireland and Jersey.

The Blue Badge course has provided a model for guide training courses worldwide. 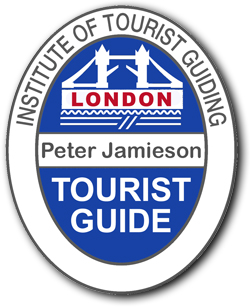